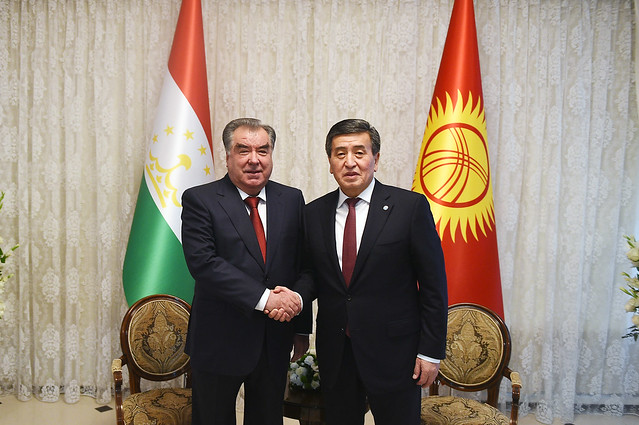 The heads of the two states summed up the results of the talks that took place in an atmosphere of complete trust, constructiveness and mutual understanding in the Tajik city of Isfara and meetings held with the population of the border regions of both Tajikistan and Kyrgyzstan.

The parties discussed a wide range of topical issues of cooperation between the Republic of Tajikistan and the Kyrgyz Republic and identified priority areas for its further deepening.

President of Tajikistan Emomali Rahmon and his Kyrgyz counterpart Sooronbai Jeenbekov agreed to take necessary measures to develop the bilateral trade between the countries and boost direct contacts between large and medium-sized businesses that drive economic cooperation between Tajikistan and Kyrgyzstan.

There was also an exchange of views on regional and international issues being of mutual interest.

The meeting also addressed aspects of water and energy cooperation between the two countries, with the focus on developing hydropower potential as a positive contributor to achieving the Sustainable Development Goals 2030 and solving social and economic problems not only of Central Asian countries, but also beyond the region.

Special attention was paid to the issue of strengthening confidence between the peoples of the two countries, especially residents of border areas. The necessity of establishing the practice of regular cultural events, mutual participation in the ongoing concerts and festivals in the border areas, including increased cooperation in education, sports and tourism, was noted.

In order to enhance cooperation between the regions of the two countries, the parties agreed to establish sister city relations between the cities, districts and regions of our countries.