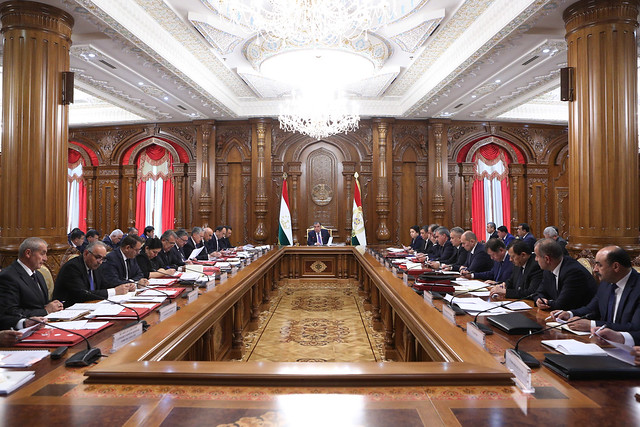 On April 30, the Founder of Peace and National Unity, Leader of the Nation, President of the Republic of Tajikistan Emomali Rahmon presided over the session of the Government of Tajikistan.

The Minister of Economic Development and Trade Nematullo Hikmatullozoda delivered report on the procedure of development of programs for the socio-economic development of regions. The procedure is based on modern and effective public management methods and takes into account the specific potential, priorities and resources of cities and districts.

To bring the process of program development into a single system, the head of state Emomali Rahmon noted the importance of considering the objectives and priorities of strategic documents, particularly the National Development Strategy of the Republic of Tajikistan up to 2030 and to present it as a methodological guide for civil servants.

The meeting also focused on the draft law “On Licensing of Certain Types of Activities,” “On Scientific Activities and State Policy about Scientific and Technology Activities" and the draft framework agreement between the Government of Tajikistan and the International Islamic Trade Finance Corporation.

The bills were sent to the Assembly of Representatives of the Supreme Assembly for consideration.

At the end of the meeting, President Emomali Rahmon gave specific instructions to the responsible individuals for the timely fulfillment of tasks set at the meeting and the continuation of preparatory measures taken for the 30th anniversary of Tajikistan’s independence.