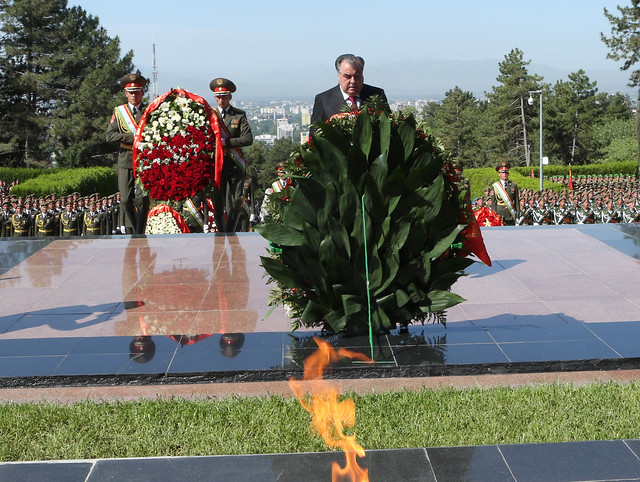 The Founder of Peace and National Unity, Leader of the Nation, President of the Republic of Tajikistan Emomali Rahmon attended the solemn military parade dedicated to Victory Day. The parade was held in the capital’s Victory Park.

The Defense Minister, Lieutenant-General, Sherali Mirzo reported to President, the Commander-in-Chief of the Armed Forces of the Republic of Tajikistan Emomali Rahmon on the readiness of the military troops for the Victory Day march.

After the performance of national anthem, President Emomali Rahmon addressed the audience, noting the bravery of the sons of Tajikistan and congratulated the labor and war veterans, as well as all the peace-loving people of the country on the occasion of Victory Day.

Victory Day is dear not only to war and labor veterans, older people, but also to the younger generation, because it stands as evidence of the highest patriotism, dedication and devotion, and serves as a reminder of great courage and perseverance in the name of defending the Motherland. “We are proud that side by side, along with the representatives of other nations, hundreds of thousands of Tajiks fought, making a worthy contribution to ensuring victory,” said President Emomali Rahmon.

President went on to note that the government takes care of war and labor veterans, regularly taking measures to solve their social problems.

At the end of his speech, President of Tajikistan Emomali Rahmon once more sincerely congratulated the people of Tajikistan with Victory Day, wishing every inhabitant of the country good health, well-being, and for our beloved homeland – lasting peace, tranquility, unity and security.

After his address, the head of state Emomali Rahmon laid a wreath at the eternal flame to honor the officers and soldiers who gave their lives for freedom. A minute of silence was declared in memory of the victims of the war.

In honor of Victory Day wreaths were also laid on behalf of the National Assembly and the Assembly of Representatives of the Supreme Assembly (Parliament), the Government of Tajikistan, the executive body of state authority of the city of Dushanbe, the Ministry of Defense and other power structures, war and labor veterans, as well as the representatives of the diplomatic corps accredited in Dushanbe and the 201st Military Base of the Russian Federation in Tajikistan.

The event in honor of Victory Day in the Victory Park concluded with a military march.