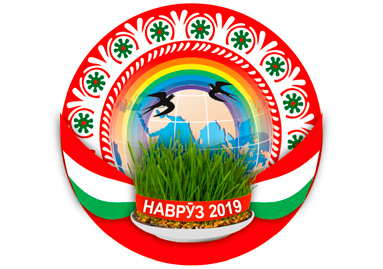 The President of the Republic of Tajikistan, the Founder of Peace and National Unity – Leader of the Nation Emomali Rahmon approved the emblem of the 2019 International Navruz holiday.

The emblem has a round shape; in its center is featured a globe, surrounded by the National Flag and the spring messengers – sumanak (Tajik national spring tasty food), swallows, needlework patterns as a symbol of folk crafts and rainbows with the inscription in Tajik and English "Navruz-2019".

The emblem may be widely used as a symbol of the International 2019 Navruz holiday by ministries and agencies, organizations and institutions, executive bodies of state authority of provinces, cities and districts, and mass media.