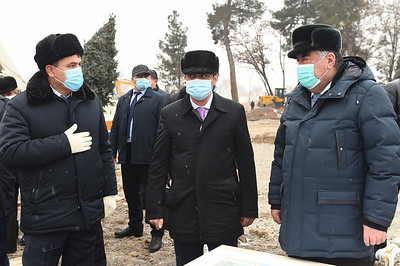 The Founder of Peace and National Unity, Leader of the Nation, President of Tajikistan Emomali Rahmon and Speaker of the National Assembly of Tajikistan, Chairman of Dushanbe Rustam Emomali planted coniferous trees while visiting the construction site of the Independence Square in Dushanbe.

The ceremony of planting trees took place in the separate area of Independence Square, which is devoted to landscaping and the creation of gardens and squares.

Construction started in July of last year and is planned to be completed by September 2021 in honor of the 30th anniversary of state independence.

The total area of the independence square with the architectural complex symbolizing Independence and Freedom is 30 hectares. The height of the symbol of independence is 121 meters tall. The square has three gates, fountains, streams, decorative waterfalls and pools, promenade areas, and a modern lightning system.

The project design of the square was developed by the creative team of the Main Department of Architecture and Urban Planning of the Executive body of the state authority of Dushanbe under the leadership of Dushanbe Chairman Rustam Emomali.

The project design, with its advant