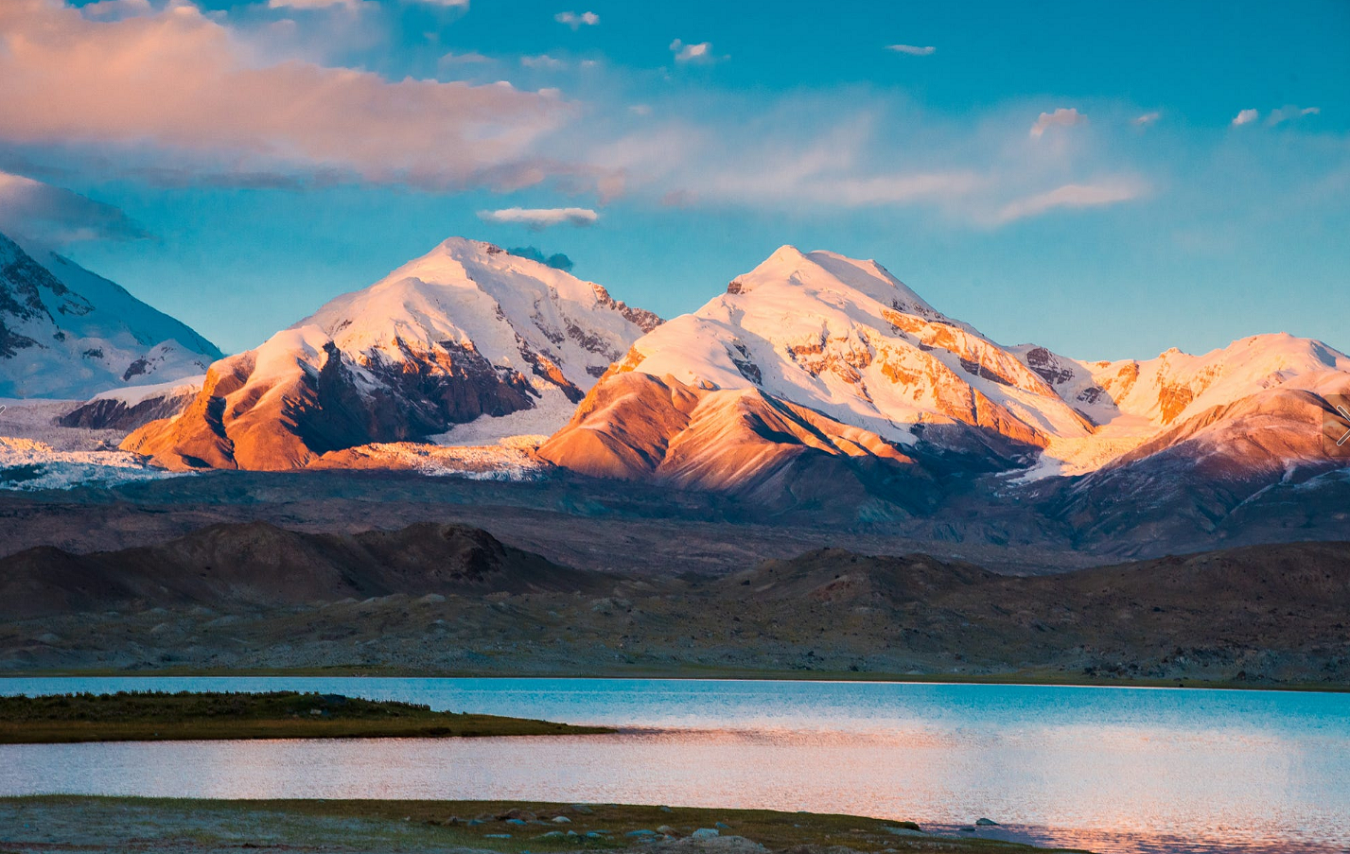 There are about 1450 lakes at the territory of Tajikistan. Some of them are located at the height of more than four thousand meters above sea level. The country is rich with wonderful lakes that have various origins. The biggest salty and closed lake is Karakul that is located to the south of the Zaalay range at the height of 3914 meters above sea level at the territory of the Gorno Badakhshan Autonomous Oblast. Its absolute depth is 236 meters. It is considered that the lake emerged during the Ice Age and its bottom is covered with permafrost. From the Turkic language, it is translated as “black lake.” Waves rise at strong wind, and the color of the water gets black tint; that is how the name of the lake emerged. According to one theory, the lake’s kettle, strongly changed because of the impact of ancient glaciations, and it has tectonic origins.

However, geological survey of the lake of the last years, and researching of the space images allowed some scientist to conclude that the lake Karakul emerged because of meteorite’s fall approximately 25 million years ago. Crater that formed at the result of meteorite’s hit has a diameter of 45 kilometers. One of the interesting features of the lake is that the lake’s banks are covered by ice at a considerable distance; ice lies even at the bottom of the lake. There is not a single opinion about origins of ice among scientists. The long and short of it is that the ice is melting and downfalls, channels, small lakes are created and small islands are separating from the banks. The lakes itself is slowly changing its sizes.

The Sarez Lake is of the most beautiful and mysterious lakes of Tajikistan. The gem of the Pamir Mountains is called “Sleeping dragon.” In winter 1911 enormous collapse that occurred in the mountains of the Pamirs at the southeastern Tajikistan fully blocked the valley of the river Bartang (Murgab) –the upper reaches of the river Amu Darya. Formed as a result of earthquake the obstruction was named Usoy. The Usoy village was buried under a huge stone mass. This obstruction is the biggest dam in the world (height – 567 m., size 2.2 km³). A big lake started to form behind the obstruction, which in 1911 swallowed the village Sarez. This name was later given to the new lake. The Sarez Lake is stretching for 60km at length and it is about 500 m deep. The bluish –green water of the lake is quite cold, but one can easily swim by the lake side and in close bays is summer times.

The heart of the Fan Mountains, gem of Tien Shan is the picturesque lake Iskanderkul. By its form, the lake resembles a triangular, as big as three and half square kilometers and reaches seventy meters in depth. The rough river of Iskanderdarya is flowing out of the lake that forms unusually beautiful and majestic waterfall called “Fanskaya Niagara” (Fan Niagara-note by translator) which precipitating from the height of 38 meters. It is surrounded from all sides by grandiose snow-capped peaks, forming in places inaccessible steeps. There are many interesting legends, which are linked with the lake Iskanderkul. According to one of them, once upon a time Alexander the Great passed via the Fan Mountains with his army. During one of his stop his favourate horse – Bucefal drowned in the lake. The lake itself is carrying the name of the great invader of the ancient times – the name Alexander is pronounced as Iskander in Central Asia. Another legend says that Alexander invaded the abundant lands of Soghdiana – the state, which was located in these areas. However, the freedom-loving mountaineers did not accept this and they constantly disturbed Alexander’s army with sudden attacks. Then infuriated Alexander ordered to dam the river on which the main city of Soghdians stood; thus the forming lake buried the castle and its brave defenders in its depths for good.

In a small area, among beautiful mountainous landscapes, on the foothills of white-snow mountains, surrounded with emerald green forests, different lakes scatter with iridescent waters – from delicate green to dark violet. There are 30 different by feature and size lakes with cold transparent water, which originate in snowy fields of the beautiful peaks. There is a small lake located by Iskanderkul which is called Zamin Mulla or Zmeiniy (of a snake, note by translator) because of abundance of snakes in the water of this lake. Kulikalon is the second biggest lake of the Fan Mountains. It is translated into Russian as “Bolshoe Ozero” (Big Lake in English, note by translator). It is located in the southern edge of the big Kulikalon kettle at the height of 2800 meters.

The entire Kulikalon kettle is accumulation of moraine lakes. The highest one is Dyushaka – 3000m. Descending from the swell of an old moraine, the path goes to the lake Bibi-Jonat, stretched in length and surrounded by a forest. Another layer, where the lake Bibi-Jonaat overflows is the wide lake of Kulisiyoh (black lake). Its banks have become overgrown with barely passable brake, and its waters are dark and mysterious. There are three distinctive lakes in the Chukurak gorge: Chukurak, Beliy (white), and Ziyorat. One of the most beautiful are considered Alaudin (Chapdara). They relate to the system of the Pasrud River. Blue, light blue lakes charm by their sky-like color and primordial purity.

Ascending upwards on the path along the Ang River, the quiet lake Ankatad attracts one’s eyes. Its banks are covered with dense green grass. The lake is hidden in the black shadow of tree stems, which are standing in the river. The Lake Maliy Allo is stretched along the river Zindon by its right bank. Absolutely light blue and sometimes emerald green the lake is placed in between bushes of birch, willow and sea-buckthorn. Sparse archa trees and rocky place that change into desert snowy and glacial accompany the new lake of Bolshoe Allo, which is pushing through an obstruction.

Striking lakes are located, surrounded by legendary Fan Mountains that attract travelers not only by fascinating beauty of nature, but also diversity of natural conditions and abundance of flora and fauna. The Fan Mountains – these are hundreds of peaks located on the ridges of the Gissar and Turkestan mountain ranges on the south-western of the Pamir-Alay. More than ten of them exceed 5000 meters and have walls with difference in heights up to 1800 m. These are heights of Bodkhon (5138 m.), Energiya (5105 m.), Zamok (5070 м.) and Chapdara (5050 m.). One of the highest peaks in this region is the summit Chimtarga (5487m.).

The Turkestan ridge is one of the main areas which consists of Pamir-Alay, is still poorly studied. The mysterious, wild, poorly surveyed because of its length and inaccessibility, this area has many walls and peaks which are still unsubdued.

Ak-Su area distinguishes by its beauty of primeval nature, unusual picturesque gorges and passes. This area is located about 120 km to the south of Khujand city. The height of the breathtaking peaks usually exceeds 5000 m: Ak-Su (5355 m.), Block (5239 m.), Iskander (5120 m.), and others. These mountains are formed from compact granite with minor “hooks” and cracks. The walls have heights drops up to 1500 m.

The Pamirs – a big mountain node is almost in the centre of the Asian continent, where the biggest mountain systems converge: Tien Shan, Hindu Kush, Kunlin and Karakorum. The name Pamir means “Roof of the world” translated from Farsi. It is here, in the centre of the high-altitude mountaineering two Pamiri seven-thousand-meters summits majesticly rush into the skies: summit Communism ( (7495 m.) and summit Evgeniya Korzhenevskaya (7105 m.)